Teaching Kids to Talk About Money

Several years ago, on the day after Christmas, Nicole and her husband had their bank account emptied by another bank which was collecting on past debts. They couldn’t make rent by January, so they lost the apartment where they were living. They couldn’t move forward on the custom home they were building and lost their earnest money deposit. They had nothing, and were forced to move in with her husband’s parents.

When Nicole was growing up her family never talked about money. She always thought they were doing just fine. Her mom wanted to protect her as all parents want to protect their children, but by not learning about how money works during childhood, Nicole had to learn the hard way as an adult. Now she’s doing things much differently with her children.

“You want them to always have that security that you’re taking care of them. When you keep things from them they kind of lose that security.”

Most of Nicole’s friends think she’s crazy for sharing how much she and her husband make and other financial information with their kids. After recovering from so much debt and such a difficult situation Nicole is committed to make generational change in the way money is viewed, managed, and understood in her family. She also candidly shares her views on saving and paying for college.

Having no idea how Nicole and her husband manage a family with 5 children and a thriving business I thought a ringmaster costume would suit this episode perfectly. She loved it! 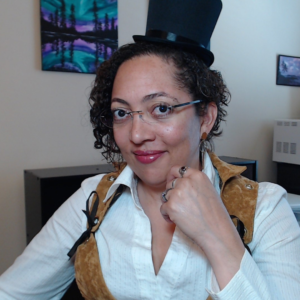 I talk openly with my family about money.