Leon Rollerson is a jazz musician who has been inducted into four different halls of fame, but he identifies himself as a teacher. He comes from a long line of teachers and loves to teach music, broadcasting, and all sorts of life skills. We connected for a beautiful discussion about finding outstanding people in our lives and recognizing opportunity.

"Opportunities are something that I really, really believe in. They come in many different styles and fashions. I teach opportunity to my students and to anyone that will listen."

Leon has a wonderful way of telling a story and shares several from his life. He teaches us how to be ready for opportunities when they appear and shares a story of an opportunity that he seized and another one which he lost. He also shares his perspective on making large amounts of money and on finding happiness.

Leon Rollerson is one of Oklahoma’s favorite jazz artists and has been inducted into four different Halls of Fame. He’s been honored with hundreds of music awards in Funk, R&B, Jazz, Blues and Soul. He performs internationally and was born and raised in the hot musical District of Greenwood in Tulsa, Oklahoma. Regularly playing to sold out crowds in places such as the Oklahoma Jazz Hall of Fame, Greenwood Cultural Center and the famous Duet Jazz Club. Leon’s company, Rollerson Broadcasting Network, produces television shows, radio programs, and hosts a Jazz Festival. You can catch the Leon Rollerson Show at 3:30 pm CST each Saturday on Ch6.1, KOTV, ch19, Satellite, COX cable, KQCW, ATT and other stations. Leon can be reached through his website www.rollersonproductions.com.

Leon’s insight when talking to someone new is astounding. He is the type of accomplished professional who remains kind and relatable that I aspire to become. For this reason, I chose a sorcerer’s apprentice inspired look for his episode. 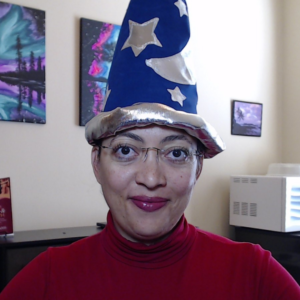 "Always leave something better than you found it."