After Dan Reynolds graduated from college he was looking for a job and the department of corrections was the first one to offer him a position. He figured if it didn’t work out, he would leave and find something else. Thirty-one years later, he was still working there. In this episode, Dan teaches us how money works for those who are in prison (inmates aren’t allowed to have cash) and shares some of the best stories from his years as a warden and consultant.

"The economy is certainly different in prison. Especially among inmates to inmates."

A prison is like it’s own community and has everything a community has from nurses, to teachers, to craftsmen. Supply and demand play a huge part in the value of items inside and each prison and its own micro-economy. As Dan traveled around the country performing audits he started asking other prison administrators to tell him their most interesting stories. His book, The Most Hilarious, Bizarre and Unusual Correctional Stories Ever Told, is available on Amazon.

Dan retired from the Oklahoma Department of Corrections in 2011, after serving 31 years. Positions he held during his career include correctional case manager, senior case manager, administrative assistant to a deputy director and warden, deputy warden, warden II, warden III, administrator of population management, assistant deputy director of the Security and Investigations Division, and administrator of community corrections.

He served at the Oklahoma State Penitentiary on three separate tours. He earned a bachelors degree in 1980, from Central State University and a master degree with honors in 2005, from the University of Central Oklahoma. He has served as a correctional consultant, independently and for the American Correctional Association, inspecting prisons throughout the United States.

He is a lifetime member of the Correctional Peace Officers Foundation and the Oklahoma Correctional Employees Memorial Foundation. Six of Dan’s books are available on Amazon under Dan M. Reynolds or if you want one and can’t find it there, you can contact him directly via email at dan1reynolds@yahoo.com.

Changing up the pirate look this time I went for a variety of browns and a really cool handmade hat. 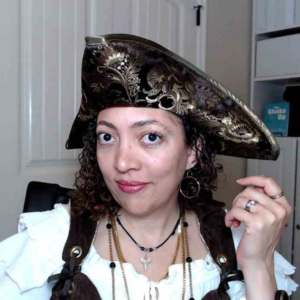 Money Mantra: "Beware of receiving funds or a request for funds from an inmate."

Tags:love of moneymoney in motion